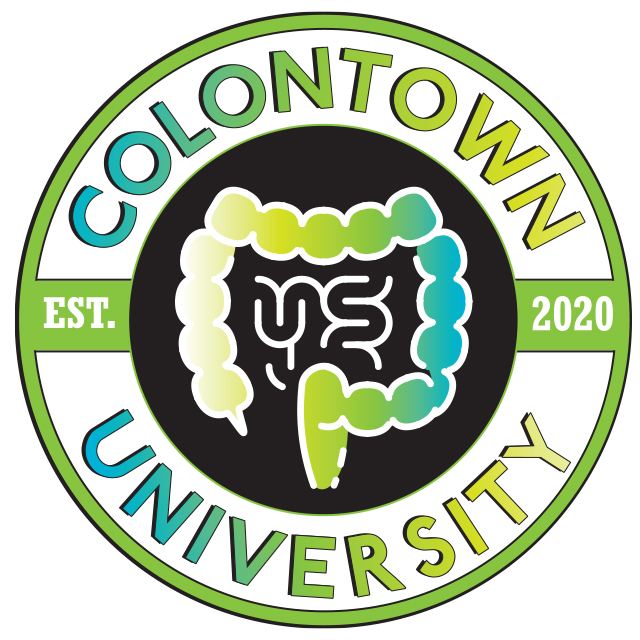 What kinds of drugs are there?

CRC 101 What kinds of drugs are there?

When different chemotherapy drugs are used together in a particular schedule or sequence, we call that a chemo regimen. You might also hear this referred to as a protocol.

There are many different regimens that are used to treat CRC — and they may vary significantly between countries! This section will cover the types of chemo regimens most commonly used in the United States.

So what chemo regimen will you get? Your oncologist will make decisions based on a variety of factors, such as:

If you want to learn more about these topics, click on the links above!

Below is a general description of each chemo regimen. If you want to learn more, click on the links in each section, which will take you to a more detailed description.

Just a note about drug names — many medications actually have two names: the generic version, (which we write in all lowercase letters) and the brand name version (which is capitalized). Your doctor might use one name or the other, or switch between names — which can be really confusing! We’ll introduce each drug with both names, but we’ll use the generic version going forward.

FOLFOX stands for a combination of the drugs folinic acid (Leucovorin), 5fluorouracil (5FU), and oxaliplatin (Eloxatin).

FOLFOX is probably the most common first-line treatment used in the US. It’s usually administered by IV infusion every two weeks.

5FU is the main drug in this regimen, and many common first- and second-line chemo regimens for CRC also include 5FU. The folinic acid does not fight tumors directly, but it helps the body effectively use the high doses of 5FU.

FOLFOX is commonly used as an adjuvant — which means that chemo is given after another treatment such as surgery or radiation. The goal is to kill off any microscopic tumor cells that may have been left behind in the body. For most patients, chemotherapy is very effective at controlling disease when patients are first exposed to therapy. Most treatments are particularly effective in the adjuvant setting for early stage cancer.

FOLFOX is also commonly used as part of total neoadjuvant therapy (TNT) for early stage (II and III) rectal cancer patients. This means that chemo drugs are given before surgery.

CAPOX and XELOX are different names for the same combination of chemotherapy drugs: capecitabine (brand name Xeloda) and oxaliplatin (Eloxatin).

Capecitabine is a pill form of 5FU, and is just as effective as the IV version. This regimen usually involves an IV infusion of oxaliplatin (at a slightly higher dose than FOLFOX). You’ll get an infusion once every three weeks, along with pills which are taken two weeks on, one week off.

FOLFIRI is a combination of folinic acid, 5fluorouracil (5FU) and irinotecan.

XELIRI is a combination of capecitabine (Xeloda) pills and irinotecan.

In this regimen, patients receive an IV infusion of irenotecan every three weeks, combined with pills taken for two weeks on, then one week off.

FOLFOXIRI and FOLFIRINOX are different names for the same chemo regimen. It combines folinic acid, 5fluouracil (5FU), irinotecan and oxaliplatin.

It’s administered by IV infusion every two weeks. It is often used as a first-line treatment for stage IV patients, and some stage III patients (especially if they have rectal cancer).

This is considered a more aggressive chemo regimen, and may not be suitable for all patients due to potentially harsh side effects. FOLFIRINOX has slightly lower drug dosages than FOLFOXIRI, and therefore may be more tolerable.

Lonsurf is the brand name for a pill containing two drugs: trifluridine and tipiracil.

This drug is generally used as a third-line treatment, after a patient has experienced tumor growth on both FOLFOX and FOLFIRI. Third-line chemotherapy can help keep tumors stable and prevent them from growing, but they may not result in as much tumor shrinkage as first- or second-line chemo. Clinical trials show that Lonsurf in combination with Avastin give better results than Lonsurf alone.

Stivarga is the brand name for the drug regorafenib.

It’s taken orally, usually once daily for the first 21 days in a 28-day cycle. A recent study has shown that this drug is tolerated better at a starting dose of 80mg. If patients don’t experience major side effects, the dose should be increased by 40mg weekly until the max dose of 160mg is reached.

Stivarga is used as a third- or fourth-line treatment after a patient has experienced tumor growth on both FOLFOX and FOLFIRI. Third-line chemotherapy can help keep tumors stable and prevent them from growing, but they may not result in as much tumor shrinkage as first- or second-line chemo.

Targeted therapies are drugs used in conjunction with chemotherapy. Your oncologist might choose to add them to your regimen if you have (or don’t have) certain biomarkers. These combinations are commonly used in stage IV CRC, and may be more effective than chemo alone.

Avastin — and it’s biosimilar Mvasi — are brand names for the drug bevacizumab. It’s very common for people to refer to this drug as Avastin.

This medication inhibits vascular endothelial groth factor (VEGF). This slows down a tumor’s ability to make new blood vessels and access nutrients — both of which are necessary for tumor growth.

This drug is administered intravenously, and can be used in combination with chemo drugs to improve their effectiveness. Avastin is usually given in combination with FOLFOX/CAPOX, FOLFIRI/XELIRI or FOLFOXIRI/FOLFIRINOX. Recent research has also shown that Avastin can help people live longer when combined with Lonsurf, so many oncologists are now using these drugs together. Avastin is usually given to patients with RAS and BRAF mutations who don’t qualify for EGFR inhibitors (cetuximab or panitumumab).

Avastin is not approved in many countries outside of the US, where it is still considered experimental.

These drugs are administered by IV.

Both cetuximab and panitumumab are monoclonal antibodies and epidermal growth factor receptor (EGFR) inhibitors. So what’s the difference?

One key difference is that cetuximab is associated with anaphylactic reactions in 15-30% of patients in the Southern United States (from the Carolinas to Arkansas). Patients who have been exposed to tick bites have a higher chance of anaphylaxis. In these instances, oncologists prefer to use panitumumab, which does not come with the same risk. The anaphylactic reaction happens within a few minutes of taking the drug — so it’s a good idea to be aware of this severe side effect.

Braftovi is the brand name for the drug encorafenib.

Encorafenib is often used with cetuximab to treat stage IV patients who have tumors with a BRAF V600E mutation. This drug combination is often referred to as the Beacon doublet. It’s taken orally on a daily basis.

Want to learn more about encorafenib?

Dr. Corocan gives a great overview on the Beacon doublet and treating patients with the BRAF V600E mutation.

Confused by all the acronyms? This chemo cheat sheet can help: 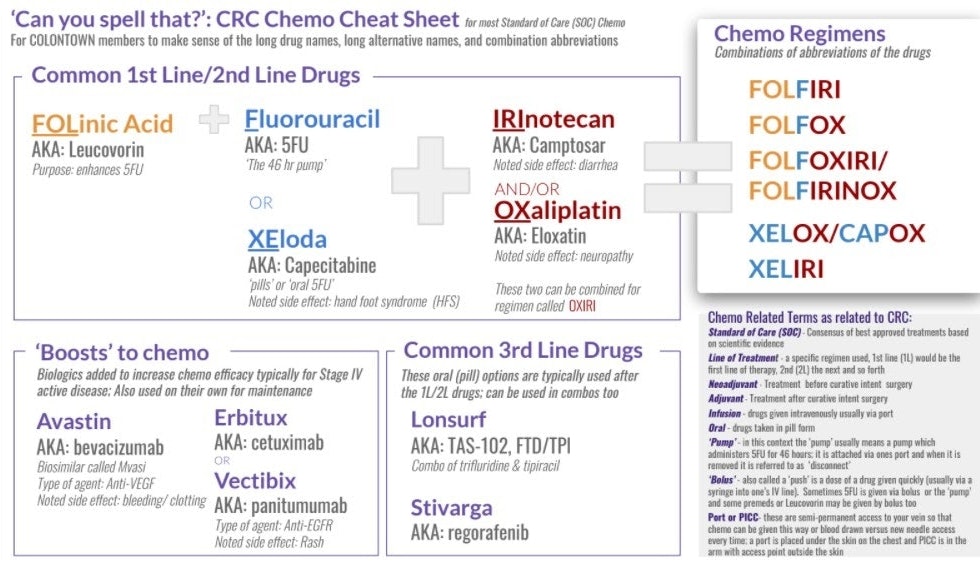 So why does all of this matter?

Knowing which chemotherapy drugs and targeted therapies you might receive can help you know what to expect on infusion day — and prepare for any potential side effects.

Want to learn more about chemotherapy?

Join us in the COLONTOWN Downtown Facebook group, where you can find support and answers to all of your questions.

Fill out the registration form here.